RenewWA signatories make the below statement and call for climate action in WA:

Western Australia has enormous potential to benefit from the transition to a clean, renewable energy powered economy.

Climate action, including requirements for WA’s largest polluters to offset greenhouse gas emissions, has the potential to deliver thousands of new jobs across regional Western Australia and Aboriginal communities in carbon farming, tree planting, Indigenous Ranger programs, renewable energy and other industries. With rich renewable energy resources, abundant supplies of battery metals and potential to generate renewable-derived Hydrogen for export, WA has a bright future ahead if the benefits of a clean energy economy are supported by strong government action on climate change.

This is our opportunity to transition to a renewable energy economy with reliable, quality jobs for Western Australian workers and maintain a safe climate for all.

Despite these opportunities, WA remains one of only two states in Australia with no renewable energy target, and the only state with significant growth in carbon pollution. The failure to control pollution from the WA Liquefied Natural Gas (LNG) industry is responsible for Australia’s national emissions growth and is putting Australia’s commitments under the Paris Agreement on climate change at risk.

RenewWA welcomes the State Government’s recent announcement committing to net zero emissions by 2050. To ensure that this target is achieved and aligns with the guidance of the Intergovernmental Panel on Climate Change (IPCC), interim targets are also required.

It is clear that the Australian Government is not providing effective or comprehensive climate change policy solutions at a national level and WA is missing out on the renewables boom while its LNG resources continue to be extracted with minimal benefit back to the community.

RenewWA organisations believe it is essential that the State Government lead action to control WA’s rising carbon pollution through a whole of government, whole of economy and whole of community approach.

The members of RenewWA call for immediate action on climate change by the State Government for the sake of workers, communities and future generations, which must include the following essential elements: 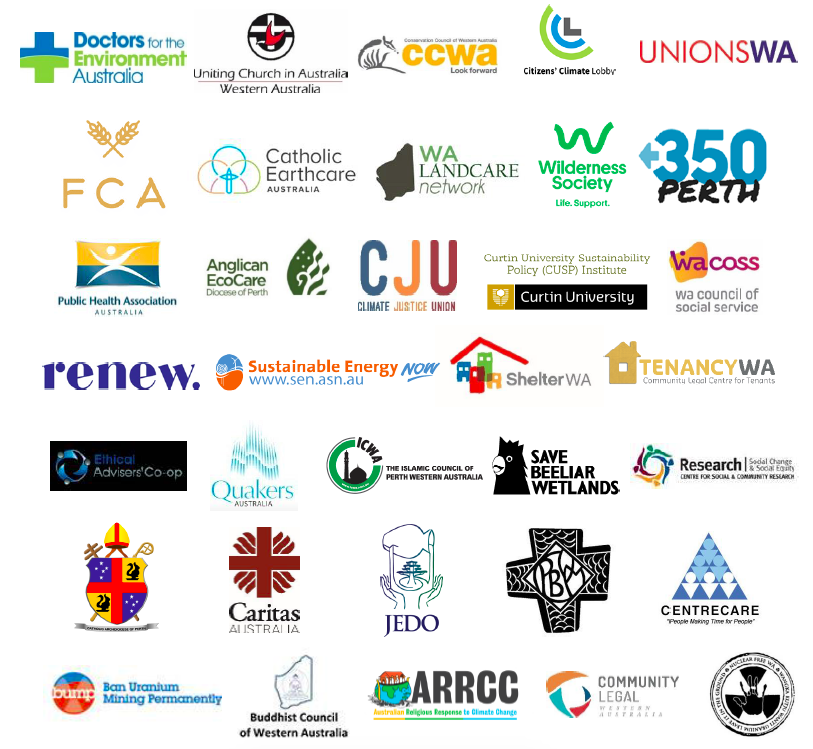