The processing of natural gas to produce LNG is extremely pollution-intensive, releasing emissions that have direct effects for public health and wellbeing for people living near or working at the facilities.

In 2016 -17 the LNG plants Woodside proposes to be utilised for the Burrup Hub project were among the highest industrial point source polluters of harmful air pollutants in Western Australia. These LNG facilities released 8,000 tonnes of nitrogen dioxide, 97 tonnes sulphur dioxide and 16,000 tonnes of volatile organic compounds (VOC’s), as well as PM2.5, ozone, mercury, and other heavy metals. Air pollutants of this type can cause serious health impacts, including heart disease, stroke, lung cancer, asthma and diabetes, even at low levels of exposure. 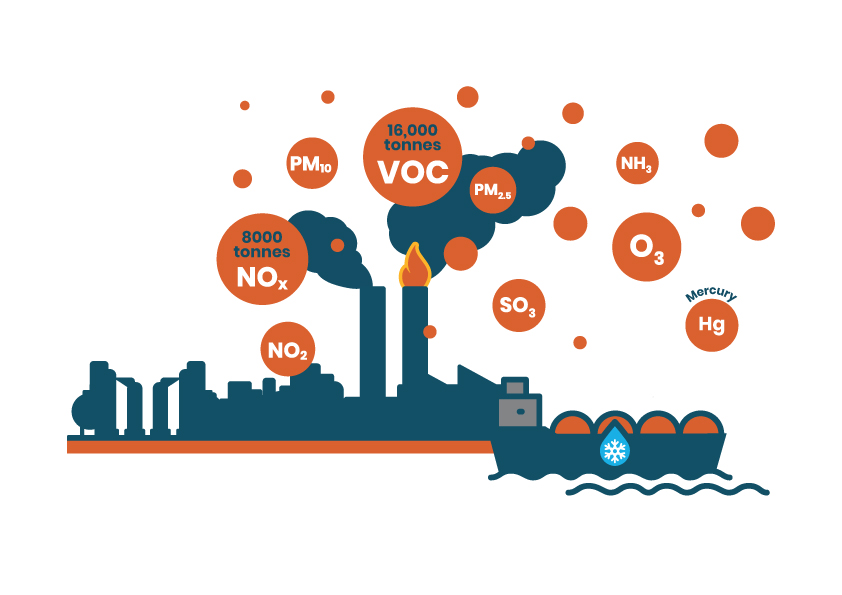 Woodside has undertaken some ambient air quality monitoring in Karratha and other locations around its LNG processing plants, however, the company has refused to release the full data from this monitoring, and the limited data that has been released is insufficient to provide evidence of public safety.

There is no reasonable and practicable way of identifying the frequency and degree of risk people living and working in the Burrup Peninsula experience as a consequence of breathing the air pollution resulting from LNG production. Therefore, the true nature, extent and duration of health burden caused by this pollution is unknown.” –Dr Sajni Gudka (Ph.D)

In addition to air pollution, the greenhouse gas emissions from the planned Burrup joint venture will contribute significantly to further global heating and increase the frequency of extreme weather events and bushfires such as those currently being experienced in Australia. The health impacts, both physical and psychological, from such events are profound and long-lasting.

Email you MP our Burrup Hub report on why Woodside's dangerous project should not go ahead and share your concerns about the health risks for nearby communities.