Denmark Community Windfarm: an example to the rest of Australia

For more than seven years, the Denmark Community Windfarm has offered a glimpse into the future of Australia’s energy system – and it could soon be generating twice the power it does now.

The recent Clean State Jobs Plan included research demonstrating that 90 percent of the South West Interconnected System could be powered by clean energy by 2030, including localised wind power like that enjoyed by Denmark.

Such a transformation would reduce carbon emissions from WA’s electricity production by 95% within nine years, and also create at least 8,650 new jobs, including 2,800 permanent jobs in operations and maintenance.

With climate change, drought and bushfires in the national and international spotlight, Denmark is among a number of communities around the world that have shown the way forward.

Denmark Community Windfarm Ltd director, Craig Chappelle, recently spoke with Clean State at the windfarm about its role in the community.

The windfarm on top of Wilson Head has a 50-hectare lease in a Parks and Recreation reserve of about 580 hectares. The bases of the two turbines are about 120 metres above sea level and the tops some 50 metres above that, where they receive considerably stronger winds, as it accelerates up the cliffs that face the Southern Ocean. 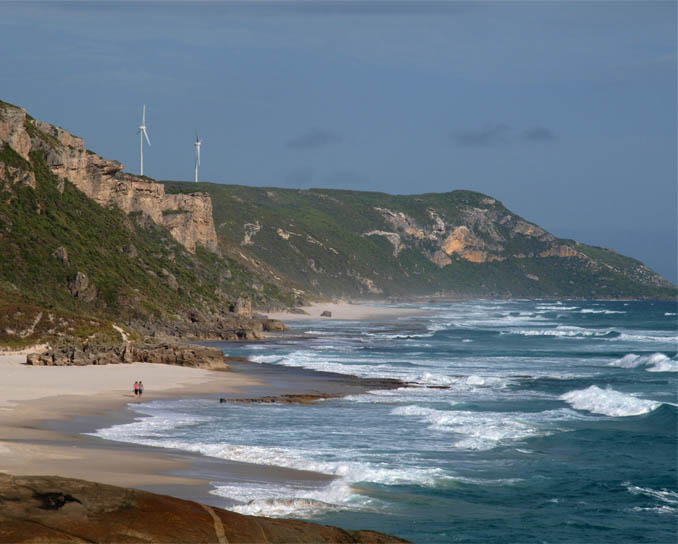 The turbines seen from Lights Beach.

“We generate around about five and a half gigawatt hours of energy per year, which is about 48 per cent of Denmark’s domestic consumption which has a population of around six thousand.

“We have permission to build up to four turbines here and hopefully, in the very near future when the world sorts itself out better, we will build another one or two turbines, and battery storage. The ultimate goal, of course, from the beginning has been to supply a hundred percent of Denmark’s energy. That’s possible, but just not right now.”

The windfarm was a long time coming but worth the wait.

“The history goes back a long way. There was a feeling that we needed to do something in the community back in the early 2000s, when renewable energy was becoming a buzz word.

“People wanted Denmark to do something about their contribution to greenhouse-gas emissions."

"We held a series of public workshops in 2003, and out of those workshops came a very clear mandate to build some kind of facility that would generate renewable energy and reduce the local community’s carbon footprint.

“It was a very long haul, but eventually we got there – around April 2013, we started to generate our first electricity into the Southwest Interconnected System (SWIS). I believe it’s one of the longest poles-and-wire grids in the world, covering an enormous area. We generate directly into that.” 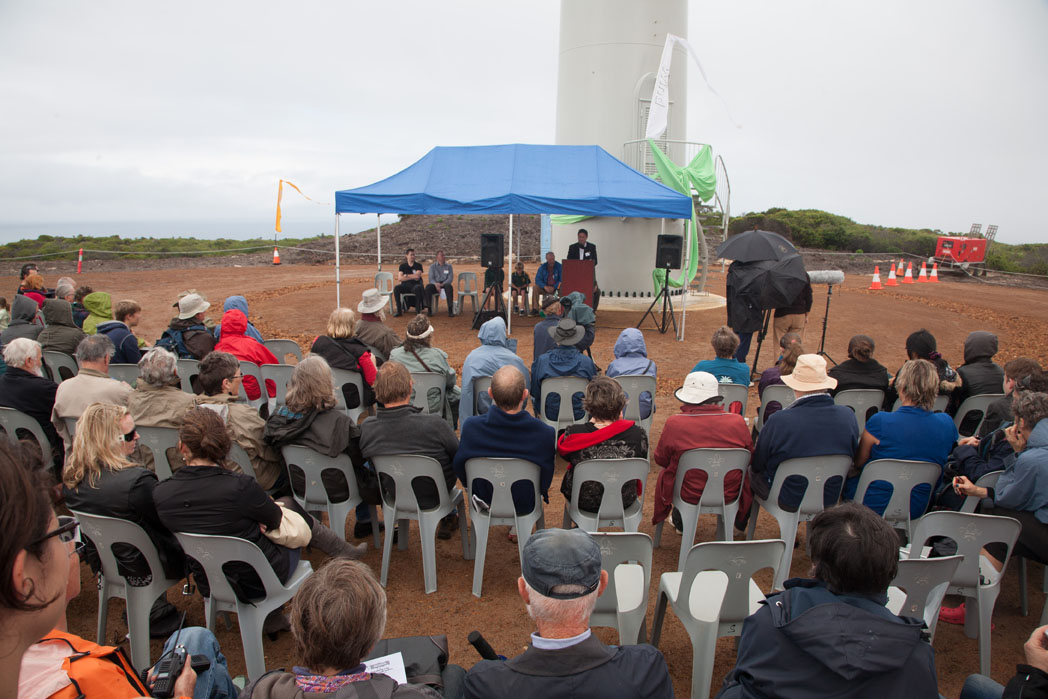 “One of the most significant events was during Easter 2007. There was a blackout in Denmark and Walpole which lasted up to 48 hours in some cases. At the peak of the tourist season, having no electricity is not a good look …Western Power was told in no uncertain terms by the Energy Minister of day to up its game. So, by the time the windfarm started to generate, Western Power had upgraded some of the lines and some of the other infrastructure they own. So that created a situation where things improved quite markedly.”

The Green Town project in 2007-8, in which local groups partnered with Western Power, further reinforced Denmark’s position as a leader in clean power and energy efficiency – encouraging residents to use less power, and use it more efficiently. This cut carbon emissions and costs, and also took pressure off the grid during Denmark’s and Walpole’s peak tourism seasons at Christmas and Easter, when peak consumption would often cause blackouts.

“By the second year of the Green Town project peak usage had dropped by ten percent,” said Craig. 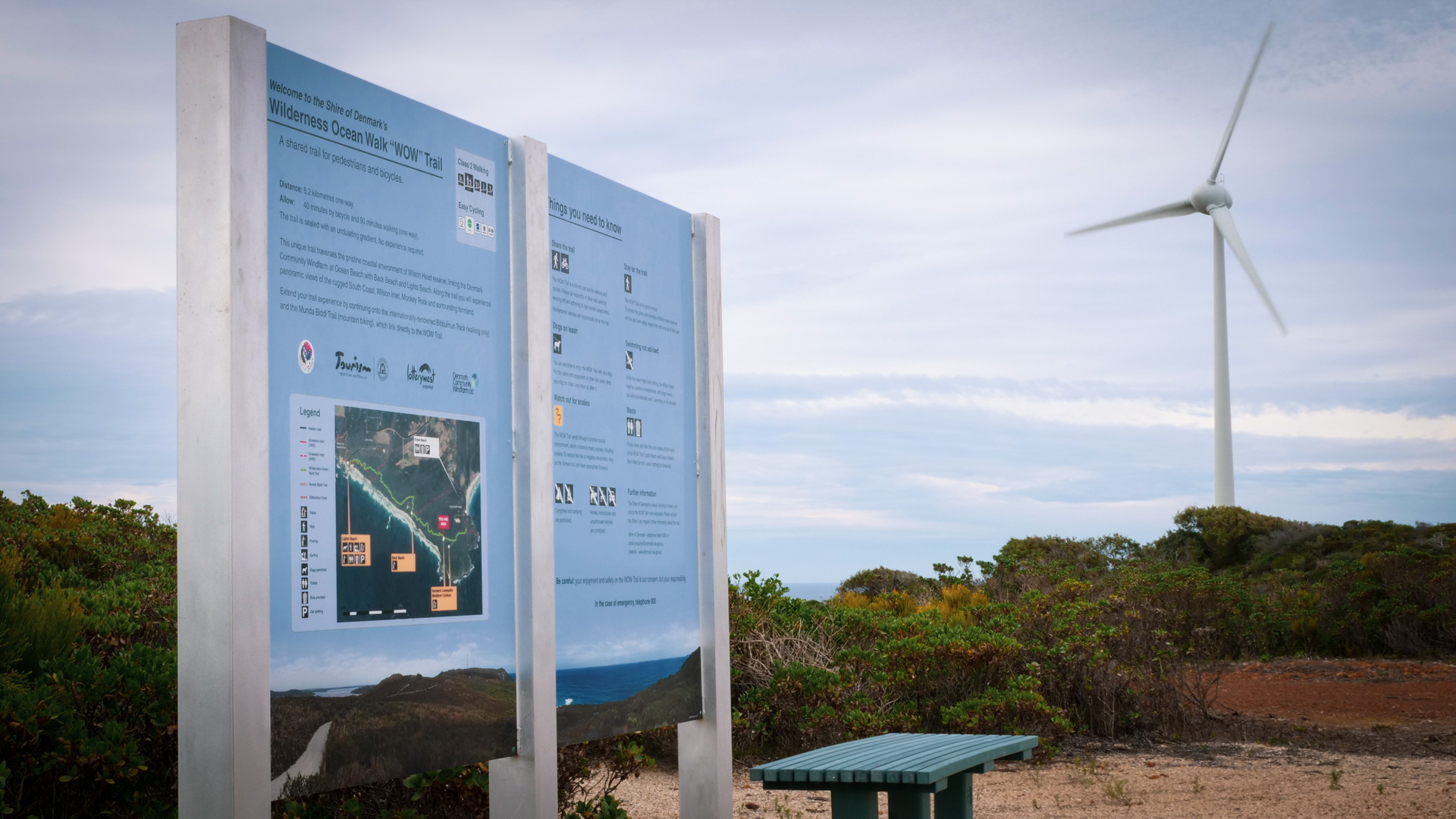 While Denmark has achieved great things, the future could deliver much more.

“Arguably, we could be sending power to Geraldton and vice versa. The grid is the grid. But from the point of view of the local service, the windfarm has helped to smooth that out and it’s the chief benefit, apart from the obvious one, of zero CO2 emissions.

"We are preventing about six thousand tonnes of CO2 a year going into the atmosphere – that’s the equivalent of taking 1500 cars permanently off the road.”

The technology of the windfarm is world class – durable and reliable.

“These machines of ours haven’t had any major problems. They’ve got a working life expectancy around 20-21 years. They’ve only been up for eight years. They are self-regulating and pretty autonomous. I mean, they’re extraordinary bits of technology.

“They react automatically to changes in wind direction, wind strength ...The beauty of the Enercon machine is that it doesn’t have a gearbox. It’s a direct-drive system, so you’re not losing energy through friction.

“And the benefit in terms of reduced carbon emissions is vast – the “carbon debt” incurred by building and erecting the windfarm was offset in just six months."

"A green metals industry, using clean energy to build the necessary equipment, would reduce that even more.

“The steel, the concrete, fibreglass, all the bits and pieces that go into a wind turbine have no carbon debt at the end of six months of operation. I’m not aware of any other technology which has that kind of repay speed and value. 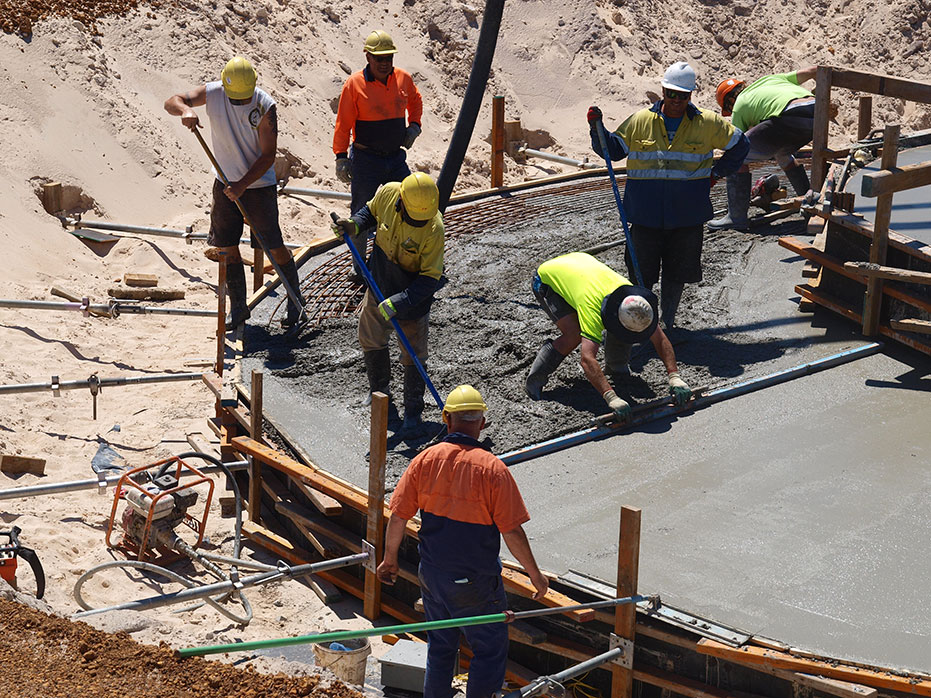 Craig said that similar windfarms built in WA could be operated as cooperatives.

“The Hepburn Community Wind Farm, for example, in Victoria, which pipped us to the post, is the first community-owned windfarm in Australia. They took the co-op model and it works very well. But in those days, back in the early 2000s, the mechanisms for operating a co-op in Western Australia were different from those in Victoria. In fact, I think each state had different rules for the establishment of cooperatives. Now, I believe there’s a national standard. At that time, the co-operative model would have been a choice for us, but it didn’t suit our business model.

“The reason we went for a public company is primarily because we could have as many shareholders as we wanted ... because the community owns this project, in essence, it behoves us to make it available, make ownership available to as many people as possible, so the public company model is the way we went.”

Ultimately, there is no rational case against windfarms, Craig notes.

“The fundamental reason that people object to wind turbines is because they just don’t like them. They can’t argue about the efficiency. They can’t argue about the need to produce renewable energy. It’s just ‘we don’t like the look of them’. That’s a very subjective view, and there’s no argument on Earth you can put forward that’s going to change their minds until they’re ready to have their minds changed. Some never will.” 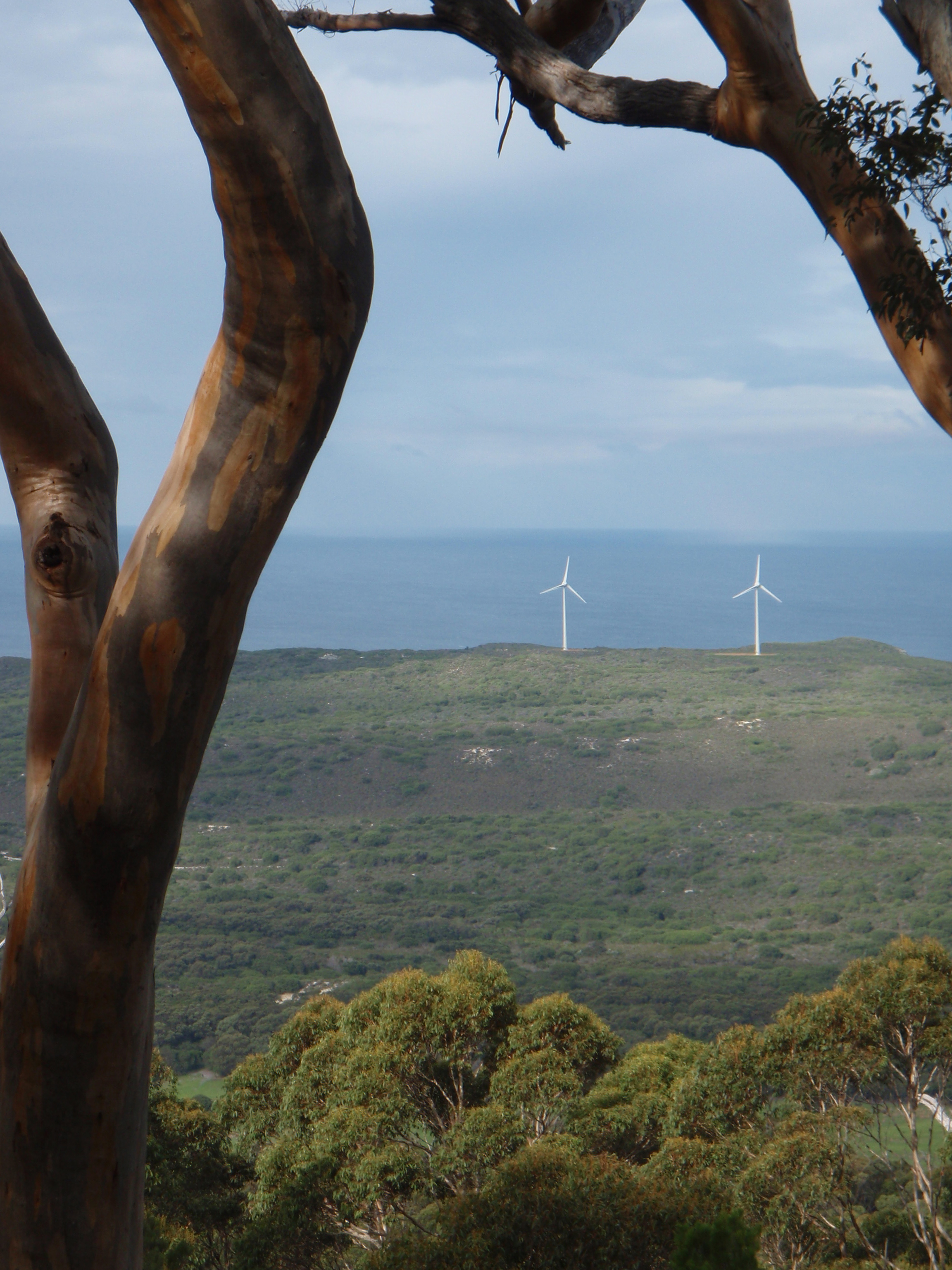 With a small footprint, the windfarm takes up very little space.

“You can you can farm around land-based turbines."

“This idea of centralised power supply, only suits the builders of the infrastructure. It doesn’t help the consumers. The first obvious answer to this problem is to switch to renewables. I mean, we’ve got a state with massive potential solar capacity, massive wind capacity, massive wave capacity.

“It’s economies of scale which are going to make renewable energy really work."

“It took ten years to get this project off the ground instead of the three or four it should have taken ... I think they need to be more of them. There are still only maybe, what, three or four community-owned windfarms in Australia that I’m aware of. Why aren’t there a hundred, or two hundred?

The WA Election Is On